Spurgeon's father and grandfather had both been independent ministers. As a youth he was subject to inner restlessness and conflict and was born again on Dec. 6, 1850, at the chapel of Primitive Methodists in Colchester, on which occasion he was deeply stirred and greatly relieved by a sermon preached by a layman on Isaiah 45:22. ("Look unto me, and be ye saved, all the ends of the earth: for I am God, and there is none else.") Spurgeon's baptism took place in the Lark at Isleham on May 3, 1851, and he then united with the Baptist communion. In 1851 he became usher in a school at Cambridge, and entered the lay preachers' association in connection with the Baptist church meeting in St. Andrews Street, Cambridge. He preached his first sermon in a cottage at Teversham near Cambridge, at the age of sixteen. His gifts were recognized at once and his fame spread. He preached in chapels, cottages, or in the open air in as many as thirteen stations in the villages surrounding Cambridge, and this after his school duties for the day were past. In 1852 he became pastor of a small Baptist church at Waterbeach, and in 1854 he was called to the pastorate of the New Park Street Church, South Wark, London. Only 100 persons attended his first service, but before the end of the year the chapel had to be enlarged. When the enlarged chapel was opened it proved at once too small, and a great tabernacle was projected. Meanwhile, in 1856, Spurgeon preached at the Surrey Gardens music hall to congregations which numbered 10,000 people; and at twenty-two he was the most popular preacher of his day. In 1861 the Metropolitan Temple, seating 6,000, was opened and there he ministered until his death, retaining his popularity and power as a preacher to the end.

The figure of Spurgeon was a composite one. Methodist by conversion, Baptist by profession, he was Calvinistic by descent and is sometimes called "the last of the Puritans." He was minded to preach what he believed even to the extent of disunion among his associations. In 1864 he preached a powerful sermon on Baptismal Regeneration, a doctrine which he opposed. 300,000 copies were sold, and numerous pamphlets written in reply, the most important was by B. W. Noel, Evangelical Clergy Defended (1864), in which Spurgeon was censured for introducing so-called needless divisions among men of like faith. He, however, ended by withdrawing from the Evangelical Alliance. He also watched with misgivings the growth among Baptists of what seemed to him indifference to orthodoxy, deploring that not enough stress was laid on Christ's divine nature. He opposed what he called the "down-grade" movement of Biblical criticism; and, not being able to win the Baptist Union to his view, he withdrew in 1887, remaining independent until the end of his life, although still a stanch Baptist.

Personally non-ambitious and unselfish, industrious in his exacting parish service and incessant Biblical study, human in sympathy and sane on social questions, democratic in temperament, he was ever zealous in the gospel of grace and redemption, and fearless in denouncing evil and upholding what he believed to be true and right. As a preacher his early success was due to the sensation of his youth, his spontaneous humor, the fervor of his appeals to the conscience, but mostly to his natural gift of oratory. With a clear sympathetic voice and easy gesture, he knew how most effectively to present his appeal for salvation, projected from a shrewd comment on contemporary life and sustained upon his expository treatment of Scripture derived from old Puritan teachers. He was in later life a great sufferer from gout, and frequently was obliged to leave his pulpit.

The results of Spurgeon's literary labors had an enormous circulation. He conducted The Sword and the Trowel, a monthly church magazine; and published more than 3,500 sermons, including, from 1855, a sermon every week, contained in The Park Street Pulpit and The Metropolitan Tabernacle Pulpit, continued after his death (63 volumes, London, 1855-1917). Other works were: The Saint and his Savior (1857); Morning by Morning; or Daily Readings for the Family or the Closet (1866); Evening by Evening (1868); John Ploughman's Talk (1869); and John Ploughman's Pictures (1880). Famous also is Our Own Hymn Book, with paraphrases of Psalms (1866). His most important work was The Treasury of David, an exhaustive exposition of the book of Psalms (7 volumes, 1870-1885). In view of his own lack of formal higher training, he was dependent in Biblical work upon the research of his assistants for scholarly material and on the Puritan teachers for method and point of view; and his commentaries are practical and homiletic rather than scholarly. Shortly before his death he completed The Gospel of the Kingdom, an exposition of the book of Matthew. 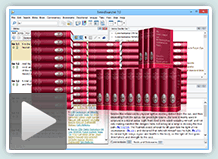 Watch this video to see how SwordSearcher works with the Park Street and Metropolitan Tabernacle Pulpit!

See what else is in the SwordSearcher Deluxe library.