A hotfix is a minor update to fix bugs that were discovered after the official release. It just fixes some issues; it doesn’t add any new features. It is strongly recommended that you install the hotfix to keep your SwordSearcher experience as good as it can be.

How can I get it?

Just open SwordSearcher and go to the Help menu, and choose Check for Updates. This will show you any updates available to you and give you a download link, if applicable.

That’s the preferred way to check for updates. You can also directly download the hotfix here:

If you’re using a version of SwordSearcher prior to 9.0, be sure to read about what’s new in 9.0 and get your upgrade here.

If you’re using the Topic Guide to find more information on a given topic, sometimes it can seem inconvenient to look at the material, because by default, it will move your Book or Commentary panel content away from what you may be reading.

There’s an easy way around that: Clone Panels (see the Help section). The way this works is instead of moving your Book panel to the content you clicked on, a new window is created instead, leaving your Book Panel alone.

Clone Panels have been part of SwordSearcher for years, but version 9 adds the ability to create a clone panel from the Topic Guide by right-clicking the entry title and selecting Open in a Clone Panel from the menu. This makes it super easy and fast to review a lot of material on a topic without changing the course of your current Bible study.

Also, you don’t even need to right-click. Hold down the CTRL button while you click the link, and SwordSearcher will open the content in a clone panel.

After a considerable development period, SwordSearcher 9 is finally available!

There are a couple of new library modules, as usual, but the real improvements are to the program itself. Version 9 adds a dark/light color mode toggle that lets you quickly adjust the color mode of SwordSearcher’s interface for when you’re working late and night in a dim environment or just trying to reduce eye strain. Check out the comparison of color modes here. What’s great about the color mode toggle is that it remembers your text and background color choices for each mode, independently. This means you can set up your favorite colors for each mode and not have to worry about losing them when you switch!

In addition to that, some serious work has been put into improving SwordSearcher’s layout and windowing systems.

Also, tool windows like the Topic Guide and English-Strong’s-Indexer now appear to the system as “top-level windows,” which means they can all be maximized, minimized, and most importantly, they now participate in Windows Alt+Tab task switching and Windows Snap functionality.

Clone panels have had an upgrade, too. You can now create clone panels that can be maximized, minimized, snapped, and Alt-Tabbed. (If you prefer the prior functionality of dockable clone panels, you can have that, too!)

We’ve also been using Microsoft’s preview builds for Windows 11. Not surprisingly, to really shine on a new version of Windows, we had to accommodate some new and changed features of Windows 11. That work has been done, and SwordSearcher 9 runs and looks great on Windows 11, which is expected to be released to general availability later this year.

There’s a bunch more stuff, including hundreds of little improvements and tweaks too numerous to mention. Rest assured though, SwordSearcher 9 is still SwordSearcher and you will feel right at home when you upgrade.

Speaking of upgrades, if you’re already a SwordSearcher user with a valid license, you can get a huge discount on the new version right here. 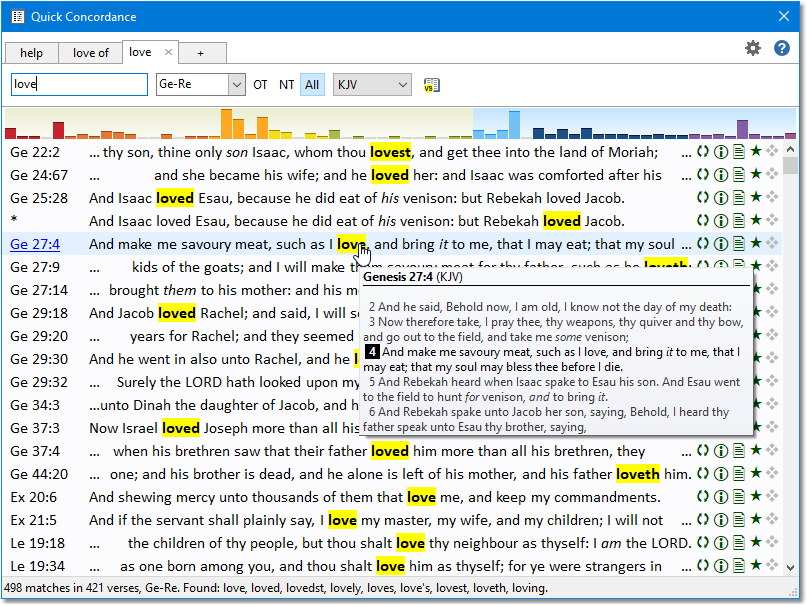 We’ve got two new commentaries (34 volumes worth of content) and lots of great enhancements in SwordSearcher 8.4. A new search tool has been developed, called the Quick Concordance. The Quick Concordance is a fast way to do “on the side” searches that don’t interrupt your study flow. It’s updated live as you type and it’s instantaneous, offering an unlimited number of new “concordance tabs” in a floating window. The QC has been integrated into StudyClick and the various pop-up menus for fast access and seamless use.

Also, SwordSearcher has had an analytical concordance tool called the English-Strong’s Indexer for many years. For version 8.4 it’s had a complete overhaul and redesign to make it faster and more flexible.

See the complete list of updates below. If you’re a SwordSearcher user already, go here for your upgrade.

Many more enhancements and several bug fixes. All of the details can be seen here.

In addition to some great new library content, the big update in this release is enhanced Audio Bible support. There are now several narrations supported by SwordSearcher’s audio Bible integration and you may link in as many audio Bibles as you have on your hard drive.

If you’re a SwordSearcher user already, go here for your upgrade.

Other improvements and fixes:

SwordSearcher’s Books and Dictionaries panel is designed to help you review similar materials in different books. For example, if you’re viewing the Nave’s Topical Bible entry on Anathema Maran-atha, the Watson’s Dictionary tab is highlighted, and clicking on it will take you to the Anathema Maranatha entry in that dictionary. This works even though the two books use different titles. Note the subtle difference of the hyphenation in Maran-atha.

This is possible because SwordSearcher has a special “best match” algorithm it uses when you switch between book tabs. Minor spelling or orthographic differences don’t typically present a problem for reviewing similar material because of this feature.

However, if you switch between books that do not have similar entries, it is possible to “lose your place” if you don’t realize what is going on. For example, if you’re reading a book comprised of chapters instead of a dictionary, it’s not likely there will be a “close match” in another book. If you switch tabs, SwordSearcher will usually just take you to the first entry.

Sometimes this might seem confusing, and you may wonder how to get back to what you were looking at before.

The Bible and Commentary panels also have back/forward navigation buttons with history menus.

If you’re interested in adding some more content to your SwordSearcher library, take a look at the Module Repository (a part of the user forum). There are over 100 additional books or commentaries you can download and plug right in to SwordSearcher and it doesn’t cost a dime.
To download more modules, all you have to do is join the forum. Then you can add any of the modules to your library. This post has specific download instructions.

Extra modules provided by the author of SwordSearcher

Over the years, as I have expanded the SwordSearcher Deluxe study library, I’ve also created books or commentaries that for one reason or another didn’t “make the cut” as “official” modules, but I’ve added them to the module repository. There are about 70 of these, from authors like:

Click here for the complete list of modules that I have personally uploaded to the module repository.

Anyone interested in SwordSearcher is welcome in the forum! It only takes a minute or two to join. Forum membership is not in any way tied to your SwordSearcher license.  Just create an account here. If you think you’ve created an account on the forum in the past but can’t remember, just use the password recovery option on the log in page.

An updated demonstration of the Scan Text for Verse References tool has been posted.

If you’ve ever been reading Bible commentary or sermon text on a web page and wished you could have all of the verse references in there linked inside of SwordSearcher, you’ll want to check this video out. It’s fast and easy to do.

So, what’s a widget, and what’s it got to do with a Bible verse?

Watch this video to see how to use and configure Verse Widgets, those handy little icons that appear below the references in the Bible and Verse List panels.

SwordSearcher has long offered the ability to create your own content in the library. This functionality has steadily been improved with new features and tools. Version 8.2, released last week, improves the editor by live-linking verse references as you type. Up until 8.2, verse references were only linked when the entry was saved. This worked well, but now you can make changes and additions and verify that the references are correct before saving the entry. This and other changes over the years prompted me to update (well, completely re-do) the tutorial video on user modules which you can now watch here.