John 3:16 For God so loved the world, that he gave his only begotten Son, that whosoever believeth in him should not perish, but have everlasting life.

...For, be it observed and ever remembered, that God's love could never have reached us save through the medium of that gift. God is holy, and we are sinful. How could we come near Him? How could we dwell in His holy presence? How could sin and holiness ever abide in company? Impossible. Justice demands the condemnation of sin; and if love will save the sinner, it must do so at no less a cost than the gift of the only-begotten Son. Darius loved Daniel, and laboured hard to save him from the lions' den; but his love was powerless because of the unbending law of the Medes and Persians. He spent the night in sorrow and fasting. He could weep at the mouth of the den; but he could not save his friend. His love was not mighty to save. If he had offered himself to the lions instead of his friend, it would have been morally glorious; but he did not. His love told itself forth in unavailing tears and lamentations. The law of the Persian kingdom was more powerful than the love of the Persian king. The law, in its stern majesty, triumphed over an impotent love which had nothing but fruitless tears to bestow upon its object. 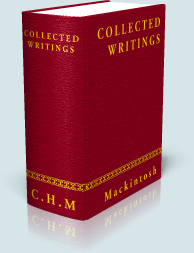 But the love of God is not like this — eternal and universal praise to His name! His love is mighty to save. It reigns through righteousness. How is this? Because "God so loved the world that He gave His only-begotten Son." The law had declared in words of awful solemnity. "The soul that sinneth it shall die." Was this law less stern less majestic, less stringent, than the law of the Medes and Persians? Surely not. How then, was it to be disposed of? It was to be magnified and made honourable, vindicated and established. Not one jot or tittle of the law could ever be set aside. How, then, was the difficulty to be solved? Three things had to be done: the law had to be magnified; sin condemned; the sinner saved. How could these grand results be reached? We have the answer in two bold and vivid lines from one of our own poets:

On Jesus' cross this record's graved,
Let sin be damned, and sinners saved.

“SwordSearcher saves me HOURS and DAYS of wandering through written volumes to find specific information. I love its simple, but effective interface.”
Pastor Ralph Brown