"We care not for your splendid abilities as a minister, or your natural endowment as an orator before men. We are sure that the truth of the matter is this: No one will or can command success and become a real praying soul unless intense application is the price. I am even now convinced that the difference between the saints like Wesley, Fletcher, Edwards, Brainerd, Bramwell, Bounds, and ourselves is energy, perseverance, invincible determination to succeed or die in the attempt. God help us." —Rev. Homer W. Hodge.

In enumerating the praying saints of the Old Testament, we must not leave out of that sacred catalogue Nehemiah, the builder. He stands out on an equal footing with the others who have been considered. In the story of the reconstruction of Jerusalem after the captivity, he plays a prominent part, and prayer is prominent in his life during those years. He was a captive in Babylon, and had an important position in the palace of the king to whom he was cup bearer. There must have been considerable merit in him to cause the king to take a Hebrew captive and place him in such an office, where be really had the life of the king in his charge, because he was responsible for the wine which he drank. 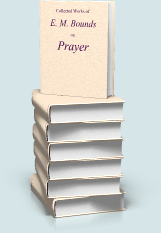 It was while Nehemiah was in Babylon, in the king’s palace, that one day his brethren came from Jerusalem, and very naturally Nehemiah desired news from the people there and information concerning the city itself. The distressing information was given him that the walls were broken down, the gates were burned with fire, and the remnant who were left there at the beginning of the captivity were in great affliction and reproach.

Just one verse gives the effect of this sad news upon this man of God:

“And it came to pass when I heard these words, that I sat down and wept, and mourned certain days and fasted, and prayed before the God of heaven.”

Here was a man whose heart was in his own native land far away from where he now lived. He loved Israel, was concerned for the welfare of Zion, and was true to God. Deeply distressed by the information concerning his brethren at Jerusalem, he mourned and wept. How few the strong men in these days who can weep at the evils and abominations of the times! How rare those who, seeing the desolations of Zion, are sufficiently interested and concerned for the welfare of the Church to mourn! Mourning and weeping over the decay of religion, the decline of revival power, and the fearful inroads of worldliness in the Church are almost an unknown quantity. There is so much of so-called optimism that leaders have no eyes to see the breaking down of the walls of Zion and the low spiritual state of the Christians of the present day, and have less heart to mourn and cry about it. Nehemiah was a mourner in Zion. And possessing this state of heart, distressed beyond measure, he does that which other praying saints had done—he goes to God and makes it a subject of prayer. The prayer is recorded in Ne 1:1, and is a model after which to pattern our prayers. He begins with adoration, makes confession of the sins of his nation, pleads the promises of God, mentions former mercies, and begs for pardoning mercy. Then with an eye to the future—for unquestionably he had planned, the next time he was summoned into the King’s presence, to ask permission to visit Jerusalem and to do there what was possible to remedy the distressing state of affairs—we hear him pray for something very special: “And prosper thy servant this day, I pray thee, and grant him mercy in the sight of this man. For,” he adds by way of explanation, “I was the king’s cup bearer.”

It seemed all right to pray for his people, but how was a heathen king, with possibly no sympathy whatever for the sad condition of his city and his people in a captive land, and who had no interest in the matter, to be so favorably affected that he would consent to give up his faithful cup bearer and allow him to be gone for months? But Nehemiah believed in a God who could touch even the mind of a heathen ruler and move him favorably toward the request of his praying servant.

Nehemiah was summoned into the king’s presence, and God used even the appearance of Nehemiah’s countenance as an entering wedge to gain the consent of Artaxerxes. This started the inquiry of the king as to its cause, and the final result was that the king not only permitted Nehemiah to go back to Jerusalem but furnished him with everything needful for the journey and for the success of the enterprise.

Nor did Nehemiah rest his ease when he first prayed about this matter, but he stated this significant fact as he was talking to the king: “So I prayed unto the God of heaven?” leading out the impression that while the king was inquiring about his request and the length of time he would be gone, he was then and there talking to God about the matter.

The intense, persistent praying of Nehemiah prevailed. God can even affect the mind of a heathen ruler, and this he can do in answer to prayer without in the least overturning his free agency or forcing his will. It was a parallel case with that of Esther when she called upon her people to fast and pray for her as she went uninvited into the king’s presence. As a result, his mind at a very critical moment was touched by the Spirit of God, and he was favorably moved toward Esther and held out to her the golden scepter.

Nor did the praying of Nehemiah cease when he had succeeded thus far. In building the wall of Jerusalem, he met with great opposition from Sanballat and Tobiah, who ridiculed the efforts of the people to rebuild the city’s walls. Unmoved by these revilings and the intense opposition of these wicked opponents of that which was for God’s cause, he pursued the task which he had undertaken. But he mixes prayer with all he does: “Hear, O our God, for we are despised; and turn their reproach upon their own head, and give them for a prey in the land of our captivity.” And in continuing the account he says, “Nevertheless we made our prayer unto our God.”

All along in the accounts of the high and noble work he was doing, we find prayer comes out prominently to the front. Even after the walls were completed, these same enemies of his and of the people of God again opposed him in his task. But he renews his praying, and he himself records this significant prayer: “Now there, O God, strengthen my hands.”

Still further on, when Sanballat and Tobiah had hired an emissary to frighten and hinder Nehemiah, we find him setting himself directly against this new attack, and then again he turns to God in prayer: “My God, think thou upon Tobiah and Sanballat according to these their works and on the prophetess Noadiah, and the rest of the prophets, that would have put me in fear.” And God answered his faithful laborer, and defeated the counsels and the plans of these wicked opponents of Israel.

Nehemiah discovered to his dismay that the portions of the Levites had not been given them, and as a result the house of God was forsaken. He took steps to see that the lawful tithes were forthcoming so that God’s house should be opened to all religious services, and appointed treasurers to give attention to this business. But prayer must not be overlooked, so we find his prayer recorded at this time: “Remember me, O my God, concerning this, and wipe not out my good deeds that I have done for the house of my God, and for the offices thereof.”

Let it not be thought that this was the plea of self-righteousness as was that of the Pharisee in our Lord’s time who professedly went up to the temple to pray, who paraded his self-righteous claims in God’s sight. It was a prayer after the fashion of Hezekiah, who reminded God of his fidelity to Him and of his heart’s being right in his sight.

Once more Nehemiah finds evil among the people of God. Just as he corrected the evil which caused the closing of the house of God, he discovers practices of Sabbath breaking, and here he has not only to counsel the people and seek to correct them by mild means, but he proposes to exercise his authority if they did not cease their buying and selling on the Sabbath Day. But he must close this part of his work also with prayer, and so he records his prayer on that occasion:

“Remember me, O my God, concerning this also, and spare me according to the greatness of thy mercy.”

Lastly, as a reformer, he discovers another great evil among the people. They had intermarried with the men and women of Ashdod, Ammon and Moab. Contending with them, he caused them to reform in this matter, and the close of his record has a prayer in it:

Cleansing them from all strangers, he appointed the wards of the priests, and the Levites, and his recorded career closes with this brief prayer: “Remember me, O my God, for good.”

Fortunate is that Church whose leaders are men of prayer. Happy is that congregation who are contemplating the erection of a church to have leaders who will lay its foundations in prayer, and whose walls go up side by side with prayer. Prayer helps to build churches and to erect the walls of houses of worship. Prayer defeats the opponents of those who are prosecuting God’s enterprises. Prayer touches favorably the minds even of those not connected with the Church, and moves them toward Church matters. Prayer helps mightily in all matters concerning God’s cause and wonderfully aids and encourages the hearts of those who have His work in hand in this world.

“I love the way my personal books and notes just fit right into the totality of SwordSearcher as if they were part of the original package.”
Jerry Foster