The Indwelling Presence of Christ

Galatians 2:20 I am crucified with Christ: nevertheless I live; yet not I, but Christ liveth in me: and the life which I now live in the flesh I live by the faith of the Son of God, who loved me, and gave himself for me.

Colossians 1:27 To whom God would make known what is the riches of the glory of this mystery among the Gentiles; which is Christ in you, the hope of glory:

The Indwelling Presence is the Risen Christ.

In Galatians, we have the great fact.

In Colossians, we have the Hope which this great fact brings. 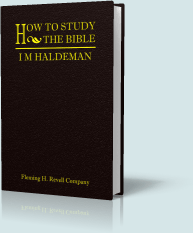 And this is the sum total of Christianity.

This is its highest definition.

Christ in Christians, by and through them multiplied, and become the omnipresent, as he is the omnipotent man, manifesting God in life and blessing to men.

Not only dwelling in the church and Christianity in general, but in the individual and particular Christian, so that each Christian may say, "Christ liveth in me."

Christ lives in each Christian in a two-fold way.

He lives in him by,

When the individual believes on the Lord Jesus Christ, owns him as his Saviour and Lord, the very essence of Christ as the Risen, Divine Man, is communicated to him. He is made a partaker of the Divine nature, he is made a partaker of Christ. It is this which makes a Christian, the nature of Christ added to the nature of Adam in the believer. The nature of the Second man coming in and dwelling by the side of the First man. It is a new generation. It is regeneration.

By giving his nature, his mind, his desires, Christ essentially lives in the Christian.

There is also another way by which he lives in him.

He lives in him by,

That is to say, after the resurrection and ascension of Christ in his glorified body to the throne of God, the Holy Spirit came down to take up his abode in the believer's body, to act in it in the name of Christ, and as his proxy, manifest him personally to the believer; so that while upon the throne yonder in his actual body, he might be manifest in his personality down here, and dwell in, live in, the believer's body through the Spirit, as though it were indeed his own very body. Just as personally dwell in the believer as he does upon the throne.

This is the two-fold way then in which Christ dwells in the believer, by his nature, and the Holy Spirit.

When Christ died, in God's sight, every believer died. In God's sight every believer is judicially at an end before him now, considered as a member of the old creation, as one in the flesh; and because he is so considered at an end in the old life, Christ comes by the Spirit to dwell in him, and in the midst of this scene of nature's death, bring forth the new life of a son of God.

In the passage before us, it is the personality of Christ rather than the nature of Christ which is looked at. It is Christ himself personally who liveth in the Apostle.

Christ may be personally alive in him and yet so feebly alive that the believer may be scarcely conscious of that indwelling presence, and the world not at all.

Two things are required for the manifestations of the indwelling presence:

First, the believer must own himself as crucified with Christ, and dead. At an end before God for all things in his old life, not only sins and vices, but virtues and righteousnesses.

Henceforth he must no longer count upon the truth and honor that are in him naturally, to aid and sustain him in his Christian life. When a man is dead and buried, his virtues as well as his vices are dead and buried with him. So, on the cross of Christ, all the good in nature as well as the bad was crucified; on the cross the whole man is dead. There is no more hope in him, or of him, than the man in the grave.

In order that Christ may fully and personally live in him, the believer must appropriate this crucifixion with Christ, enter into it, and own himself as wholly dead in the flesh before God.

Second, as one who is dead and therefore has no longer any power over his body, he must yield himself up to the personal, indwelling Christ.

It is well known that certain minds and temperaments can be so acted upon by another that they will think the thoughts and act out the suggestions of that other; so that their bodies may, in a sense, be said to be indwelt and possessed by that other. We call the law of this condition hypnotism, and we say that the person so acted upon is hypnotized.

In a far higher, nobler, and thoroughly reverential sense, it may be suggested that it is the privilege of each Christian to be hypnotized by the indwelling Christ. So submitting ourselves to him that our minds, our wills, shall be his; that we shall think his thoughts and act out his suggestions, until he shall possess our bodies, and by and through his Spirit use them as his own.

And when it is remembered that he does actually live in us both by nature and Spirit, it ought to be with perfect ease and full delight that we own ourselves as dead, yield ourselves entirely up to him, and with the Apostle in thankful tones cry out: "I no longer live, but Christ liveth in me."

When he is weak, when he would faint by the way, Christ living in him furnishes him with his own faith, meets him at every point with that faith, and through it pours forth his own life into every atom of his being, until the delighted believer is led to cry out with the Apostle: "The life which I now live in the flesh I live by the faith of the Son of God."

It is a wonderful, unspeakable fact, Christ living and dwelling in the believer's body, exercising his own faith, and seeking through the exercise of it to make the believer live in all the joy and power of the Divine sonship.

And the splendor and power of this fact will be in exact proportion as the believer sees that he is crucified with Christ, that he no longer lives, that Christ is his life from the dead, and yields himself completely to him.

This is the great fact: The Indwelling Presence— "Christ liveth in me."

2. The hope which this great fact brings.

The glory held out in Scripture is immortality at the Coming of Christ, either by the resurrection of the dead, or the transfiguration of the living. The glory of a perfect body, a body that shall be like unto his own glorious body.

Our Lord Jesus Christ was patient in all things, but he was not content that the body in which he dwelt should remain mortal; hence he carried it into death and the grave, triumphed over them in it, made it immortal, took it up to the throne of God, dwells in it there, and shall dwell in it forever, forever manifesting to the universe the wonder of a shining, glorified, immortal, human body.

If he was not content with his own body as a dwelling place till he had made it immortal, will He be perfectly content till he has made our bodies as his dwelling places also immortal? Sooner or later if he tarries they must die and fall into decay, and thus the body that has been the temple of the Holy Ghost, the dwelling place of the eternal life, shall at the last be vanquished by him who has the power of death, that is the Devil; and over that which had once been a witness to the glory of Christ shall be written that victory of Satan which would be the shame of Christ.

Such a consummation would be indeed a scandal to the Son of God, a fearful commentary on his own immortality, and a grave question as to the permanency of his relation to those whom he calls his own.

In carrying the Living Christ within, the believer carries the hope that casts its light onward to the glory hour, and illuminates all the way between. Just as the Pillar of Cloud and Fire went with the children of Israel by day and by night, assuring them that they were being guided, and guided home, so this Indwelling Presence picturing to us each day the Morning hour and the Morning land, is a constant witness that we are being guided, and that we are being guided home.

What a pledge of grace, of certitude, and love.

Well may the Apostle exclaim, speaking of this in-living Christ: "Who loved me and gave himself for me."

The indwelling of this Presence brings with it a double obligation:

As Christians, we are under obligation to the world to let Christ live in us so freely, so fully, that men may see and know Him who is the Way, the Truth, and the Life.

We are under obligation to the Indwelling Christ to let Him so live in us, that he may manifest himself to the world.

It is his desire. This is why he ascended to the throne and sent down the Spirit in his name.

He yearns to-day to use your lips and mine, our hands and feet.

Yonder is one in sorest trouble. The blessed Christ would speak and comfort him. He can only speak by your lips and mine. There is a hand that is trembling. He would like to take it and hold it in his own and give it the clasp of assurance and perfect love. He can only do so with your hands and mine. Up yonder flight of stairs, in yonder dingy room, is one sick and nigh to death. He would climb those stairs, kneel by the bedside of the sick, and touch the fevered brow. But he can only climb those stairs with your feet and mine; he can only kneel with your knees and mine; only with our hands can he touch the fevered brow; only with our voices utter the message of love; only through our bodies manifest himself to a sad and dying world.

Shall we deny him this?

Shall we deny him our feet to climb those stairs; shall we keep back those hands that he would use; and shall we seal the lips by which he would speak the tender message to the dying soul?

Nay, rather, shall we not say:

"Take my hands, and let them move
At the impulse of thy love.
Take my voice, and let me sing
Always, only, for my King."

And by every movement of our bodies say to men as we pass on our pilgrim way: "I no longer live, but Christ liveth in me." So live that our lives shall be a demonstration that "Christ in us, the hope of glory," is the Indwelling Presence that guides us in that way.

—Isaac M. Haldeman, How to Study the Bible, from Chapter 10: The Indwelling Presence.

“I love SwordSearcher. It is the best Bible program that I have used. I use it every week when I prepare messages to preach.”
Joshua Turk